Dutch companies TWOFIFTYK and Backbone International joined forces for the “Balance” tour show by Dutch DJ Armin van Buuren in the United States. An ambitious project with no less than 14 shows on 13 locations.

After three weeks of touring through the United States, we’ve spoken with TWOFIFTYK Creative Director and CEO Sander Reneman, and Backbone International Managing Director Joris Joosen about their cooperation, the tour, and the influence their companies have on the worldwide industry. 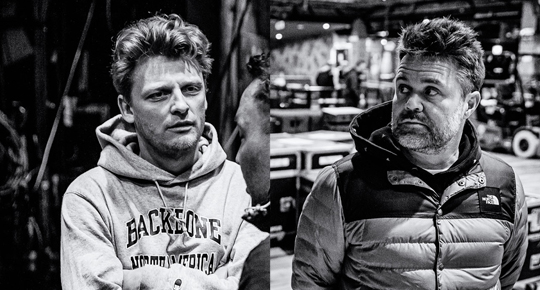 Both companies are leading players in the industry and known for their specific expertise. TWOFIFTYK is an agency which develops creative and innovative concepts, while Backbone International is the supporting partner for companies that are in the business of creating, organizing and financing events. Together they complement each other very well, forming a strong team that is able to work fast, while still maintaining quality on a top level.

Reneman and Joosen know each other since the early days of live entertainment. They have been working together on project level for more than ten years at projects such as the Formula One Ceremonies, The Flying Dutch, Vliegende Vrienden, Edison Pop, WetNation and We Are Connected in Myanmar, New Horizons Festival in Germany, and the Amsterdam Music Festival.

The story behind this project

For 10 years, TWOFIFTYK has been involved in almost everything that has to do with both Armin van Buuren and his related projects such as A State of Trance, for both the creative side and the management part. Reneman about their history with the DJ and his brand: “In the beginning we were asked for a supporting role on one of his first Armin Only shows in Utrecht, which eventually led to a permanent touring team that runs all his shows and after 10 years  even a management role in the Armin team, and to become a partner in the continuation of the brand Armin van Buuren in which we design everything from stages to merchandise, and from corporate identity to tours.”

For this specific USA Balance tour TWOFIFTYK has designed the complete tour set, which consisted of a stage design with a unique A-shaped DJ booth with an LED setup and additional lighting setup. Reneman explained: “It was designed to blend in with the different large and small venues to deliver the same high-quality show on each location. MFX Engineering had an important role, as they have strongly supported us with the development of the booth. In addition to the stage design, we’ve also provided the entire tour management, such as the logistics, technical and hospitality advancing and the communication with the different internal and external parties.”

Reneman about the creative concept: “The underlying idea behind the stage design was to visually translate the brand Armin van Buuren to the show. Everything revolved around the “A”, coming back in the form of the DJ booth, the lighting and video setup and accompanying visuals. The show was built around telling the different songs that Armin has written in recent years, which he specifically made for his new album “Balance”, and to give his guest artists the space they deserved to tell their part of story. It was therefore also important that with every photo or video made by both us and the visitors, this brand experience came to the foreground as strongly as possible. 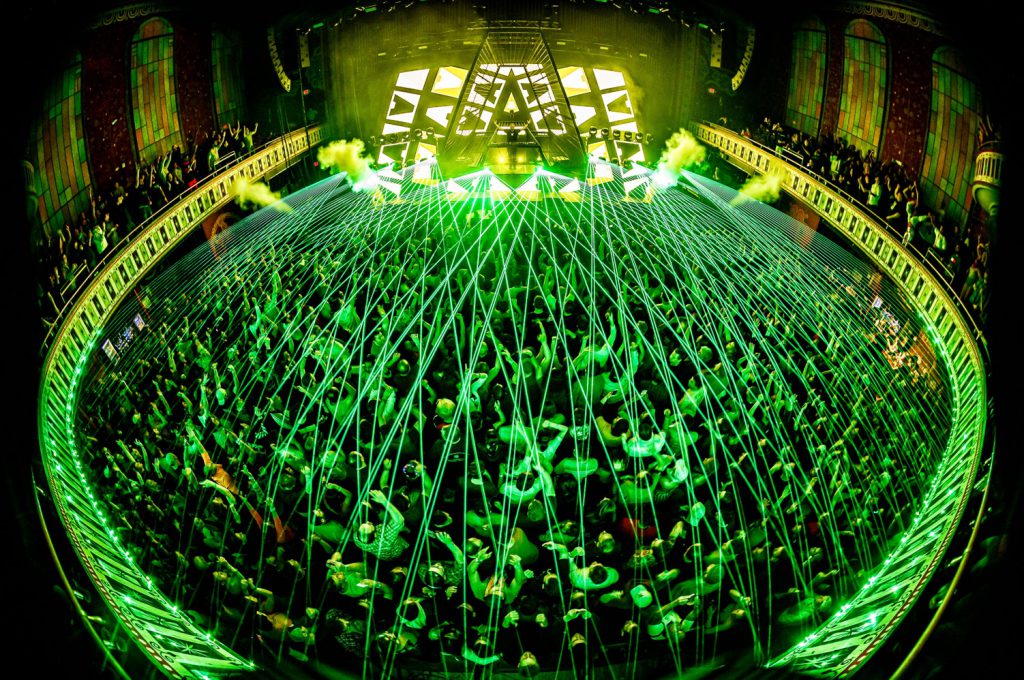 The involvement of Backbone International

In August 2019, TWOFIFTYK once again asked Backbone International for their cooperation. Joosen about their role: “Backbone International was responsible for the complete local production for the Balance Tour, deploying a team of thirteen crew members onsite, who travelled with the three trucks and all the materials.”

And about the preproduction: “The first shows were in Mid-January 2020, and with a tour show such as this, preparation is key. The stage design was an important technical feature, which made it possible to work with extremely short timeframes between the shows. TWOFIFTYK did an outstanding job in prepping the tour, so our team was able to build the set in four hours and break it down in only two. Three hours after the show, the trucks were already on the road onto the next location.” 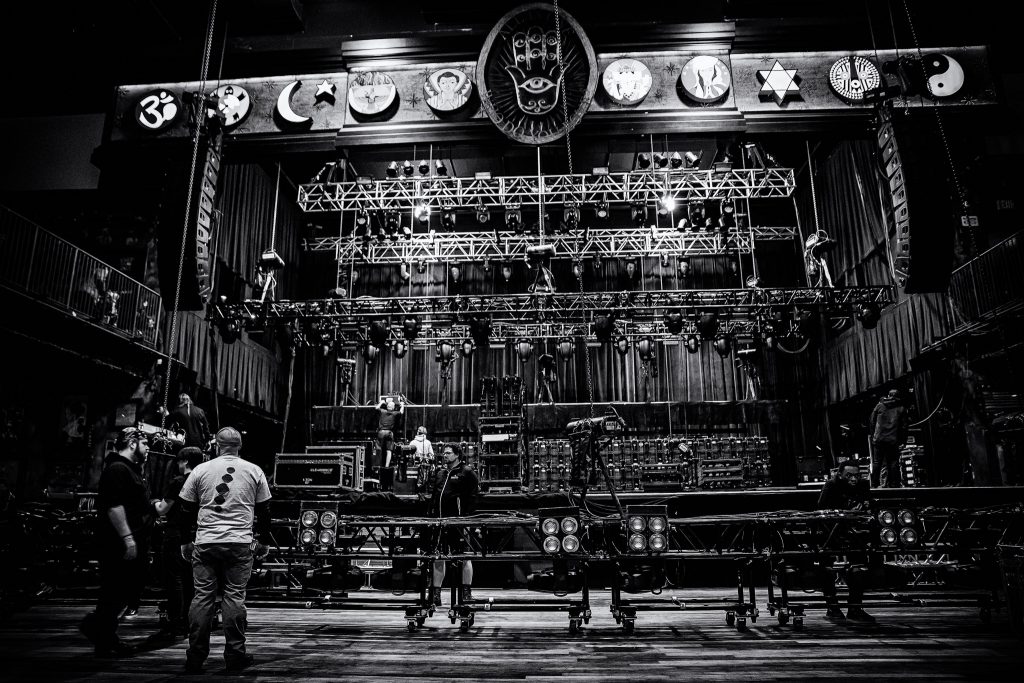 Reneman added: “Most of the time was invested in the design of the tour set and the logistical preparations with flights, bus transport and the transport of the materials. All the plans were in a continuous state of development to guarantee that we could deliver the same quality everywhere, while we still had to prepare ourselves for the possibility that you for example don’t have enough time or space to build up the entire tour set at a specific venue.”

And he continued: ”The stage design was easy to load and fit within the limited space there was on both the bus, trailer and transport via airplane. In addition, it was designed in such a way that it could be built quite easily without a large manual. It nevertheless had to be buildup and broken down again between every single show. With the technical and productional expertise of Backbone International in the USA and their local network, we knew that they would be able to make it happen.” 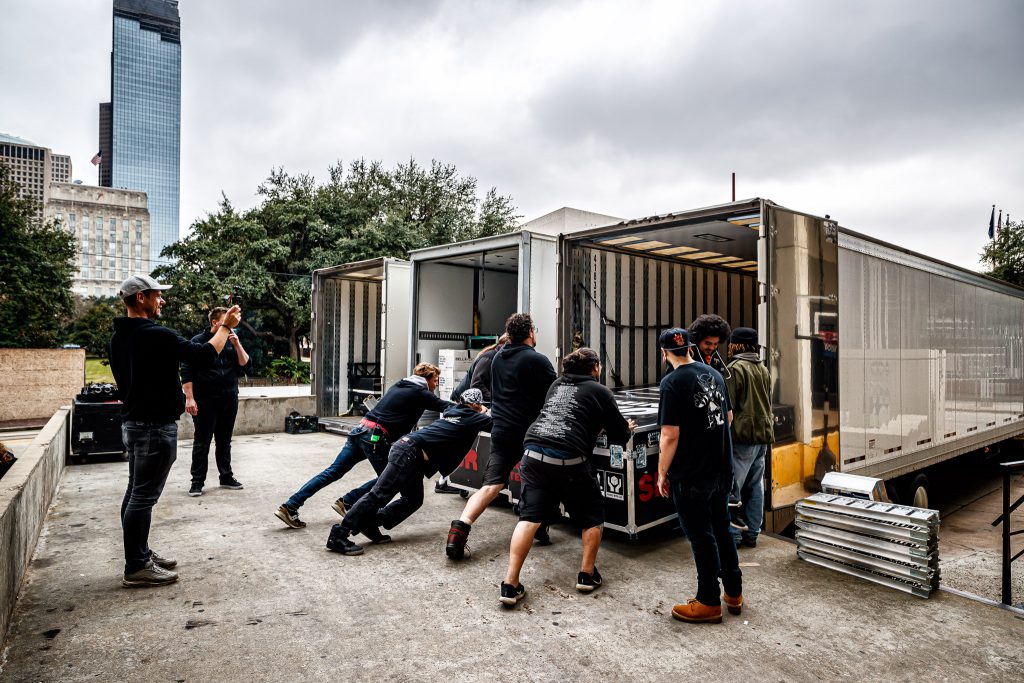 Reneman about the difference between this tour show and a regular tour: “To be on this tour for 3 weeks, is completely different than we are used to with the normal Armin tours. These tours can have the same duration, but are often on different festivals all over the world. The biggest difference is that besides being on a bus tour where you are constantly on the road, sleeping while you travel, and working from place to place, you have a show in which you can develop yourself.”

He added: “The show on day 1 for example, looked different from the last one. You have the possibility to make each show better than the previous one. With that in mind, this also has a strong influence on planning and logistics. Since you are constantly on the move, and you have to think ahead of all materials and people being on the right place on time to have enough time to build up, program the show, run and finish it, and get enough rest to prepare for the next day.”

Joosen on his side of the spectrum: “By repeating the same cycle on a daily base, the team members became very well in tune with each other. Seeing this happen is, even after many tour shows, still a bit special. And the team is not only working together every day, you are working, eating and travelling together, which really creates a strong bond.” 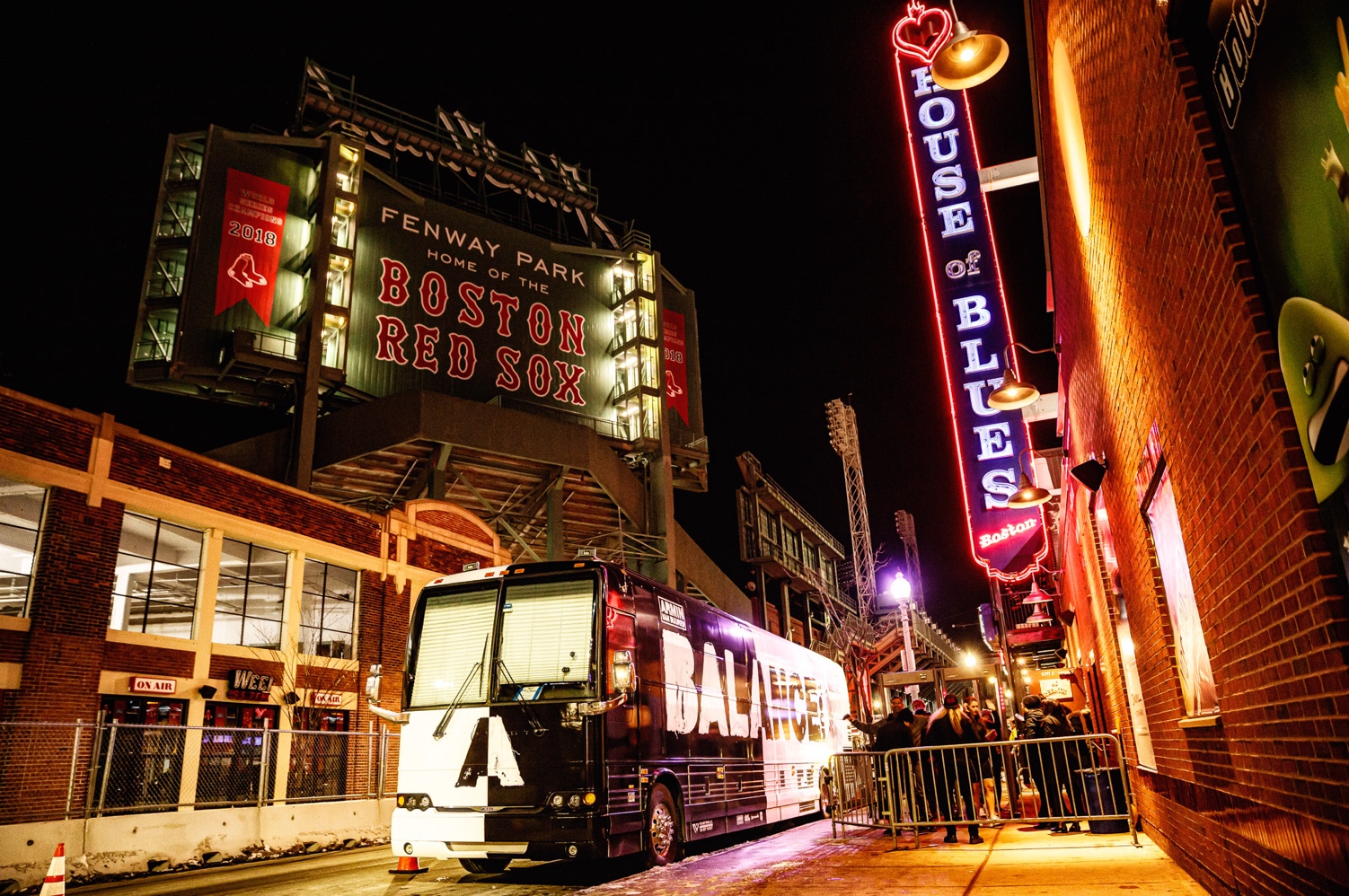 Although the preparations before the tour where extensive, the companies still had to face some challenges. Joosen: “We had to deal with a lot of bad weather and traffic jams during the tour, which caused delays. In some cases, we arrived too late at a venue and had less time to buildup. This made it challenging and exciting, and we’re proud that the team managed to start every show right on schedule.”

Not everyone is suited for the job, however. Joosen explained a bit more: “You have to be flexible, capable of dealing with alterations, and willing to make an extra effort to pull of an amazing show with the artist on every day of the tour.”

Reneman about their biggest challenges: “We for example had to deal with a software update that caused a problem with the video controls, which luckily could be resolved quickly. Another challenge we’ve faced, were the venues where we had to be creative with the stage design or in the load-in of the materials due to limited heights.”

How they’ve approached these kinds of challenges: “For tour shows such as this one, it’s important to have an open mind, and to constantly develop yourself and the project in regard to the logistics, technical production and show. You must be prepared to face the craziest problems, be creative in your solutions and communicate well with each other as a team, both internally and externally. With such a tour, you are not only together on the road, but 24/7 which created a close bond.” 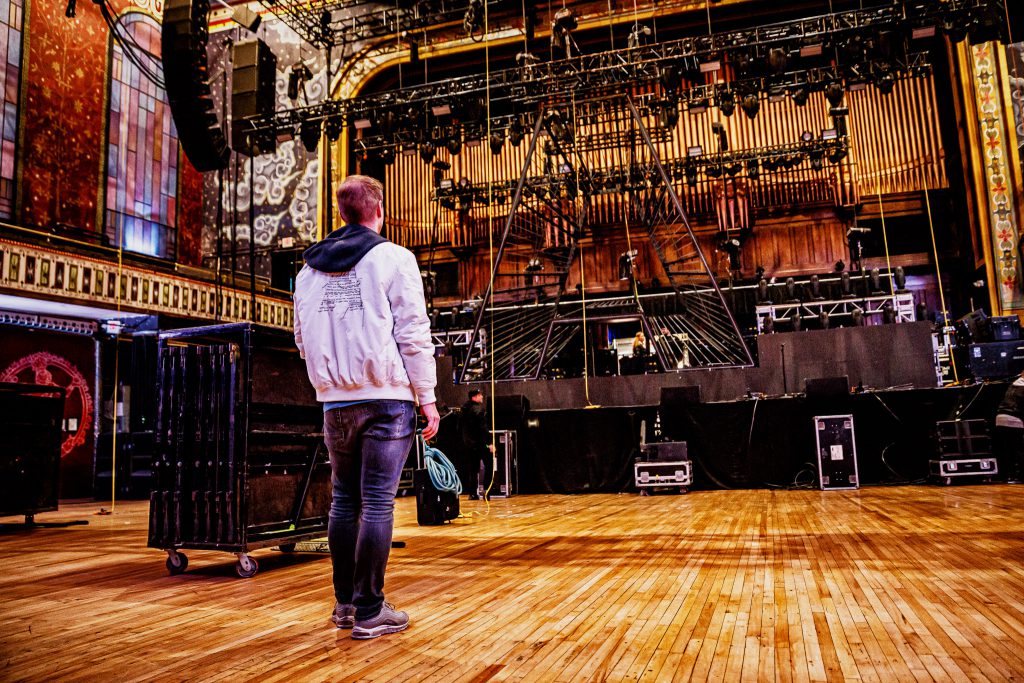 The success of Dutch dance in the United States

This tour was not the first project TWOFIFTYK and Backbone International cooperated on in the USA. The 2 companies worked on projects like the I Am Hardwell and Armin Only tour shows and Electric Zoo.

Reneman about the history of the Dutch dance industry: “This industry was founded a long time ago in the Netherlands, which means that the experience for the Dutch companies is already developed so far, that we are still the leaders in both the technical and creative areas. The Dutch mentality also plays a big role, we tend to be work towards making the picture complete and perfect, whatever obstacles we may encounter along the road.”

Backbone International started their office in the United States around seven years ago. The company is doing numerous projects and events on the continent. Joosen told about how the company became so successful: “Although the way of working there is different than in Europe or Asia, in the end it all comes down to the same, producing great projects and creating unique experiences for visitors. The Dutch way of thinking and doing business makes us stand out from competitors. We’re not the type of people waiting silently, but we tackle issues and make things happen.”

Other highlights on the extensive portfolio of Backbone International in the United States are the Sensation shows, TomorrowWorld in Atlanta and last year’s campsite on Electric Daisy Carnaval in Las Vegas. A couple of years ago, the company also did a special project at the renowned Burning Man Festival. Joosen noticed how the industry had changed during the last years: “I’m currently seeing a lot more creation and decor, basically inspired by the European festivals and events. The Dutch people and event companies are still the pioneers and early adapters in the dance industry. We can share our experience and knowledge; in the United States they’ve noticed this as well and use it for their growth.”

Thanks to the previous experiences of Backbone International and TWOFIFTYK, the companies are nowadays working on some very prestigious projects around the world. And although they are just recovered from this 3-week Balance tour, both Joosen and Reneman are looking forward to many more to come.

Hereby we would like to thank David Lewis Productions and Armada Music for making us part of this wonderful project, and to Bart Heemskerk, the photographer who was with us on this tour. 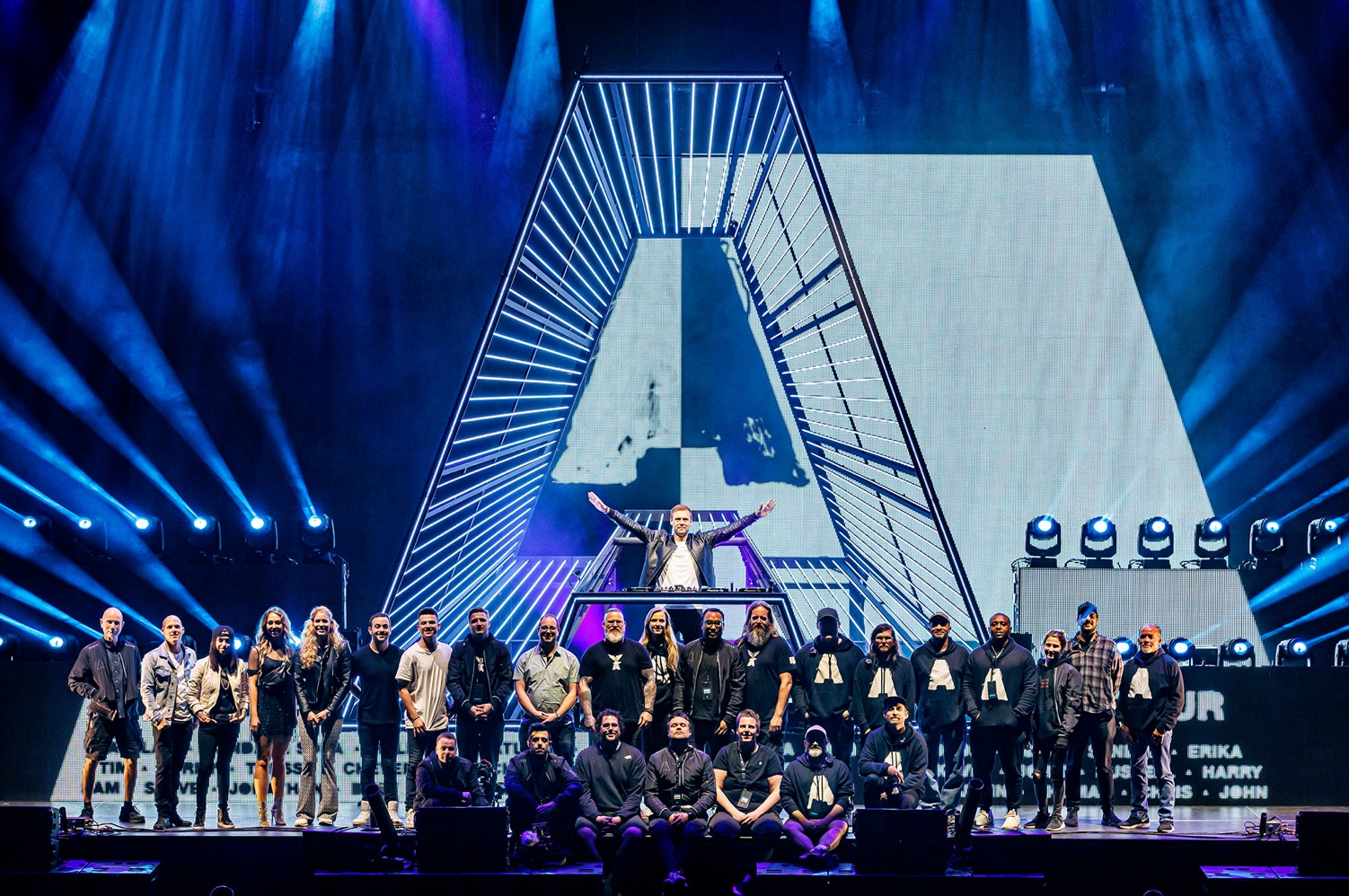