Starting as a freelance producer for Dutch entertainment and medium enterprise, ID&T, a young Joris Joosen had the foresight and vision to create a fresh venture. The goal? To provide a service that translated creative plans into feasible productions across the globe.

Over the last nine years, Backbone International has attempted to cultivate this vision while maintaining high standards in efficiency, safety and quality. With a wide variety of services, the company supplies production management and technical production along with technical design and overlay management. Since its creation, Joosen [who currently takes on the role of Managing Director] has always wanted Backbone to live up to the ‘International’ name in its title. To this end, the company has bases in New York, Amsterdam, Jakarta and Hong Kong – establishing itself in the world of large-scale dance music, with clients including Sensation and Tomorrowland.

Over the years, one region that has been of serious interest to Backbone International has been the UAE and more recently the KSA. The entry point for Joosen and the wider Backbone family had been via Sensation – the world’s leading dance event. “By 2014, we had produced Sensation shows in over 30 countries on five continents,” began Joosen. “For us it was a great next step to produce a show in Dubai.” The MD explained how most EDM events across the globe have high production standards, but Sensation “brings that to a whole new level.” He elaborated. “The level of details in the set, technically and aesthetically are phenomenal. Bringing Sensation to the UAE meant we had to get involved with local suppliers and their teams. Together we worked on the complex technical production of the first outdoor edition of Sensation.”

Joosen explained how during the first 2014 project, the local Dubai crews who were working on the project showed great interest in the production, especially in the way Backbone International approached dealing with technical equipment. “For a Sensation production, it’s not just hanging lights, audio and video – it’s all about how you hang products. It’s a very specific process so as to get the most out of their functionality,” stated the MD. “In the UAE, the suppliers and their teams were very eager to work with us and they really stepped up to deliver to their best ability. In the end it was the welcoming spirit of the UAE and their suppliers that made the difference.”

Moving on from the success of the 2014 event, the Backbone team has continued to return to the region for a selection of events in both the UAE and more recently, the KSA region. “I think for us, the Sensation in Bab al Shams was definitely a highlight,” reflected Joosen. “To build a show in the middle of the desert, in the midst of sandstorms was a challenge that ultimately turned out to be a huge high point from our time in the region.”

Recently, the company has expanded its Middle Eastern portfolio, worked on last year’s Saudia Ad Diriyah E-Prix in Saudi Arabia along with 2018 biggest EDM event, BAO Festival. For BAO, Backbone assisted promoter Envie Events with the technical production and design with its company’s technical producer dealing with quite a selection of challenges. With the festival taking place next to a racehorse track, meant the stage couldn’t be built higher than the first 15m because of the lighting needed on the track. The upper part of the stage had to be built in just six days. Although Backbone was brought on later than usual for this scale of project, its technical producer and his team of local workers nevertheless made this large dance festival a great success.

With over five years experience working in the region, Joosen listed some of the lessons he and his team had learned working in the Middle East. “What we have learned is that you need to be connected to the locals,” he mused. According to the MD, this not only included surrounding themselves with Arabic speakers but also being mindful of cultural conventions. “Being flexible and able to adapt to local cultures is a very interesting and important part of our work,” he stated.

Being involved in such a selection of events across the globe, TPMEA quizzed the MD about any commonalities between any Backbone International productions. “We are very straightforward and ‘tell it how it is’ no matter who we are talking to,” he enthused. “It’s the easiest way to communicate and bring information across and accomplish a project. Of course, we need to adapt and adjust to the local culture, but our work ethic and methodology is the same anywhere else in the world. People are very much open to our opinion and the knowledge we trying to share. For us it’s important to always be straightforward and proactive.”

To close Joosen discussed his thoughts on the development within the region. “Last year was the first time for us to work in KSA. The market is opening up in Saudi Arabia, with last year’s Formula E marking one of the first ever-mixed audience events. At the end of the year we will be back at the Formula E in a bigger presence than last year and working on another couple of requests later in the season. We are also trying to get involved in the Abu Dhabi sustainability week and we hope that BAO, the great event from Envie, will return in 2019.”

With an ever growing roster of events, Backbone International seems to be considering new ways to increase its presents in the region. Perhaps even with a permanent base? “Its certainly a possibility,” admitted Joosen. “With the right local partner we are very open for this and we believe it would be very good to share our network and knowledge here permanently with a local team, instead of doing this on project base. Its fits into our idea; think global by acting local!”

We look forward to witnessing the company’s next larger-than-life project. 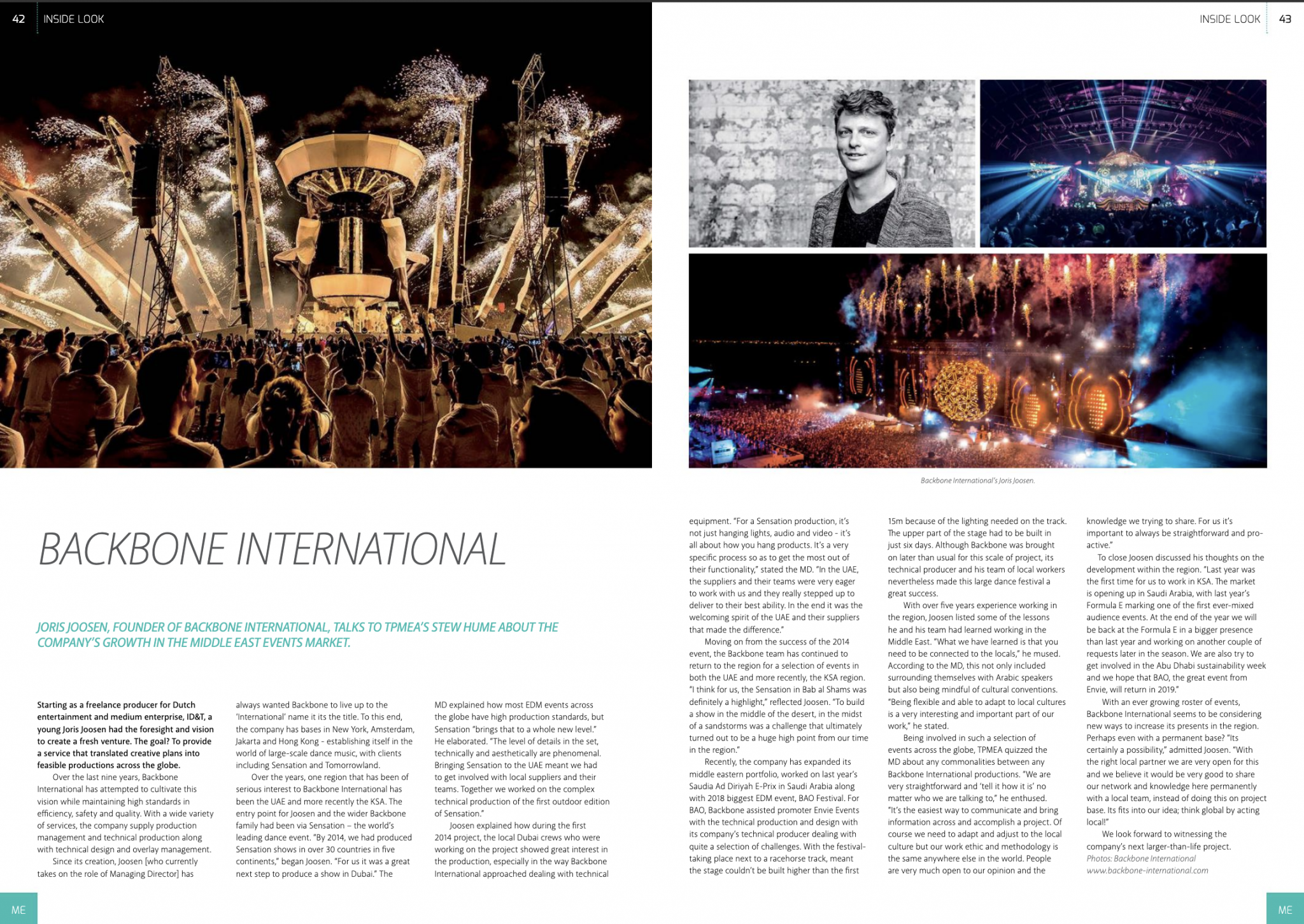