Backbone International was founded in 2010. After decades of working in the entertainment industry alongside each other, the partners of Backbone discovered a mutual ambition; building a global production agency with the focus on fulfilling complex and prestigious projects.

At the start of this decade more and more Dutch festivals and concepts spread their wings abroad. This was the moment where we learned that a proper and safe production was not a given, compared to our home country the Netherlands. After years of working abroad and traveling the world with several concepts and events, we felt it was the right time to join forces and realize the dream of building a global production agency that is known for serving the highest quality in the industry.

The work ethic and pro-active mentality we learned back home helped us a lot in producing efficiently abroad in different cultures, environments and locations. We enjoyed working on the largest challenges, the so-called ‘impossible projects’ and turning these into reality.

Backbone started in 2010 with the two founders Marcel Elbertse and Joris Joosen. As the number of projects increased rapidly in both the Netherlands and abroad the search started to expand the team with like-minded people who owned the ‘Backbone DNA’. Pieter Lubberts and Rutger Jansen joined in 2013. The first expansion step was merging with Live Republic, owned by Pieter Lubberts, which in the Netherlands had made a name for corporate and consumer events. Pieter is in charge of the Backbone Europe office.

Within the same year, Backbone merged with Rutger Jansen’s BPM International, which resulted in a Backbone office in North America, with Jansen in the lead. From this point, Backbone International becomes a fact. At the beginning of 2016, Backbone opened their third office in Hong Kong, to be as close as possible to the fast growing Asian market. Joris Joosen is based there to serve the Asian market and explore the exciting opportunities that come along with rapid growth.

From the start in 2010 until today we created a global network with like-minded people who own the ‘Backbone DNA’. We are eager to further expand our knowledge, network and experience to make even more ‘impossible projects’ possible. 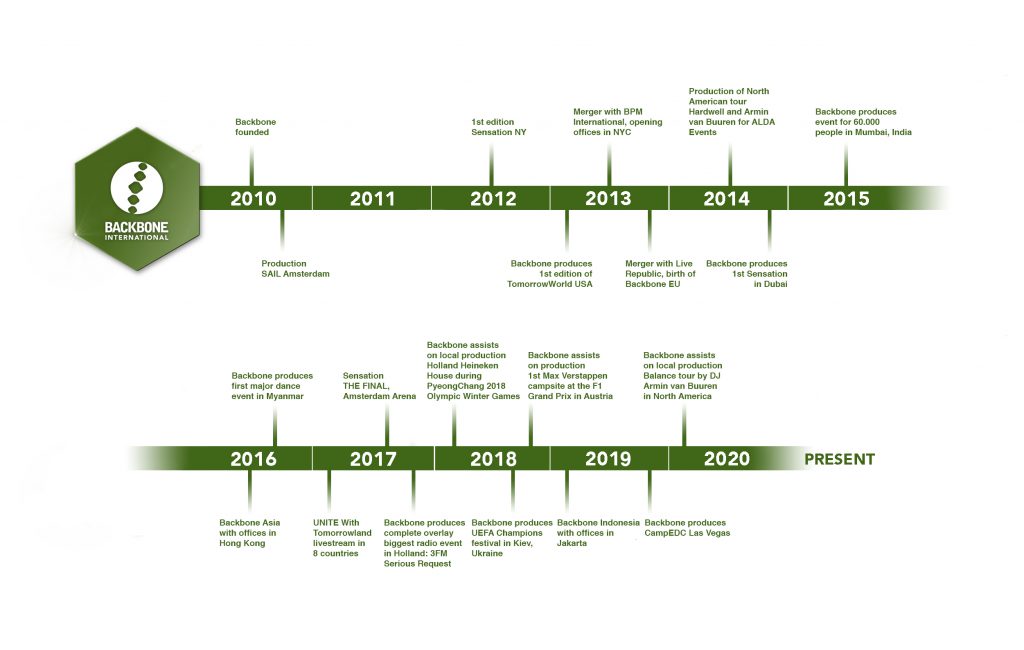