From June 23rd to 26th 2022 Defqon.1 Weekend Festival took place at Biddinghuizen, The Netherlands. This festival is nothing short of massive. And when we say massive, we mean one of the largest campsites in Europe with over 45,000 campers; multiple stages; 36,000 square meters of decking floors; 30 kilometers of construction fencing; 1 kilometer of stage barriers; over 150 cabin and containers and more than 61 machines for lifting on the busiest build-up day…

Commissioned by one of our trusted clients, Q-dance, team Backbone has been involved in the production of Defqon.1 Weekend Festival for many years now. For the 2022 edition we took care of producing multiple stage areas like the BLACK, BLUE, RED, UV, the Premium & Relation Deck and the entire campsite including the Comfort Camping among other things. Backbone’s responsibilities ranged from technical design to the full technical production, from overlay management to the entire campsite production, and this year, Backbone was also responsible for the management of the power infrastructure as well.

Technical Producer Jari van Leerdam, “What we do at Backbone is translating the often wild creative ideas from our clients into feasible plans and make it executable and buildable within the set budget. The process starts with the technical designs where we set and map out every detail, and let me tell you, there were a lot for Defqon.1. After that the whole pre- and actual (technical) production begins”

Backbone was responsible for the big and smaller stages. The main stage – well known as “RED” -, was the biggest of them all, being 152,5 meter wide and 38 meter high. Across “RED”, was the Premium & Relation deck which was built on 60 pontoons. “Our team started working on the full pre-production of the 2022 edition almost 7 months in advance. Then from June 7th everyone got on site with June 22nd being the deadline for everything to be ready. June 23rd was marked for show rehearsal and the day for final tweaks and the festival eventually ran from June 23rd until the 26th. We worked in close collaboration with Q-dance, Artfx, The Whole She-Beng and many other fantastic parties on this huge project. Together we were able to create something that was truly magical” Jari recalls.

Of course, every production brings its own challenges. “Unfortunately, a lot of the experienced crew have left the industry due to covid. So, the buildup and production took longer than we were used to. Another “test” for us was that we were conducting a simultaneous load-in with the load-out of De Opwekking, which was another large event that took place on the same terrain. So, a single point of entry to the venue was being used two ways. We were, in a way, fully dependent on the other organizers to build off and load out in time. But despite all the challenges, we still pulled through and made it all work. Seeing thousands of people run inside when the gates of the RED Stage opened is an absolute highlight for me. It makes all our hard work more than worth it” concludes Jari.

Producing one of the largest campsites in Europe

With 7 different fields to set up and get fully ready for over 45,000 visitors a day – the production of the campsite for Defqon.1 Festival was no easy feat. Mette Horstman, Technical Producer at Backbone and campsite in-charge “The facilities available at the campsite ranged from a full blown “Glamping” experience including bars, a hairdressing- and massage salon, jacuzzis and many other activities, to rows and rows of toilets and showers.”

At Field 1, the “Glamping” area called Comfort Camping, there were private suites- which are real luxury tents with their own bathrooms and toilets. There were also containers that were converted into hotel rooms, and other great accommodations. Everything you needed was present at the Comfort Camping – from multiple different facilities and activities to a beautiful reception area and even a wellness. Exotic plants, multiple lounges and fancy furniture, this campsite was quite something. Field 2 onwards got more “basic”, but the team had to ensure that all the infrastructure was in place, and all the happy campers had access to everything they needed for the weekend.

“Post covid, due to increased prices and a shortage of good crew, it was a lot more expensive to make a nice and cozy campsite. And normally, with experienced crew, things get produced quickly, but now it took twice the time. We needed more creative thinking and collaborated with many more people and suppliers to make things happen. I still can’t believe we pulled it all off eventually. Once everything was ready and running and then seeing all the happy campers having the best times of their lives, that’s the moment where it all comes together” states Mette.

Getting a site like Defqon.1 Festival fully ready requires countless hours of planning & preparation. Backbone took care of all the infrastructure and overlay. From fences to pagoda tents and tables, to chairs, ropes, fire extinguishers and signage – the list is long and detailed! Laurens Kaizer, Production & Overlay Manager at Backbone, “The numbers we worked with were insane, for example: 10.5 kilometers of bamboo to cover the fences; 196 pagoda tents; around 15,000 Square meters of Aluhal and 110 refrigerators for backstage only. It was impossible to work with one or a couple of suppliers for it all, in fact for this edition we worked with hundreds of them!” With every passing year, the effort is to make the whole build-up process eco-friendlier. “We try to increase the switch to electric vehicles. Seeing the crew ride around on site on bikes is kind of regular now but this edition saw a close to 300 electric bikes and scooters being used on the busiest day! This is definite a step in the right direction” tells Laurens.

With all the challenges that the pandemic, and other world events have brought, every single crew member took a united front and rose to the occasion. “It is so cool how much was achieved despite all the hick-ups. Seeing the team making the impossible possible in such challenging times is the real icing on the cake and makes me very proud! Jari, Mette and myself are the ones doing the word here, but we never could have done it without our Backbone colleagues Jenno Roelofs (Technical Producer) and Mick Hoezee (Overlay Producer) who made countless hours during the pre-production, on site, as well as after the event. And of course, Stan van Winden (Technical Designer), Jos de Ruig (Technical Producer & Overlay Manager), Sven Leinenga (Technical Producer & Overlay Manager), Frank Stechwey (Technical Producer) and Simone Verhagen (Planning), the client and all the suppliers! Cheers to the entire team for yet another successful Defqon.1 Weekend Festival” ends Laurens. 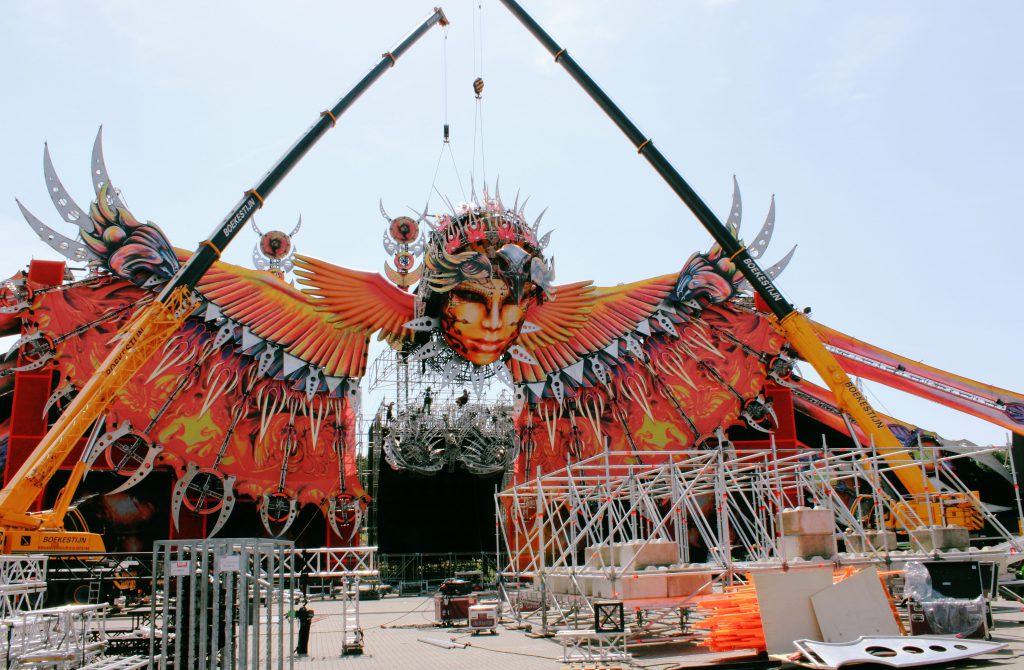 Lifting the massive head of RED 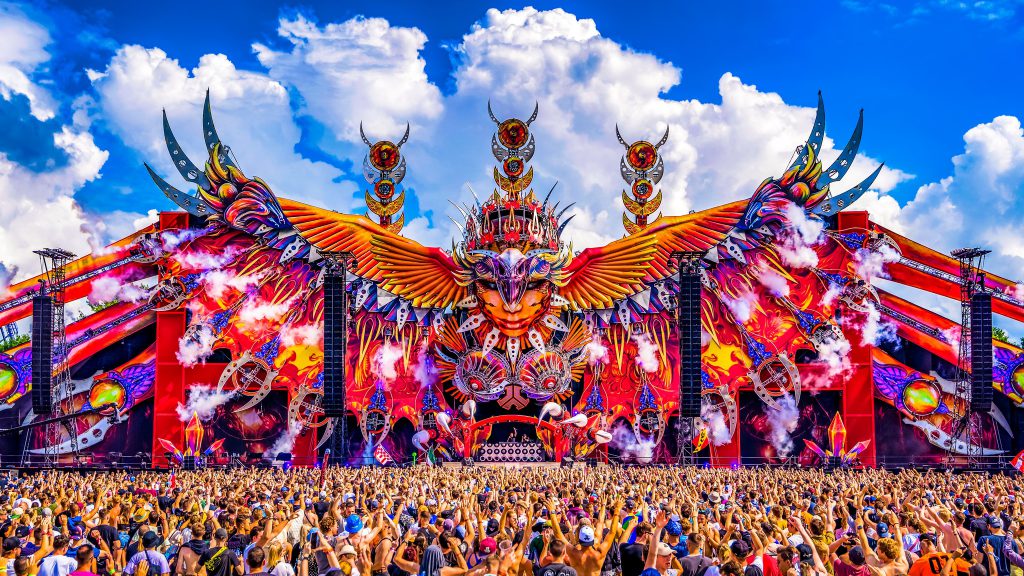 The impressive main stage during show 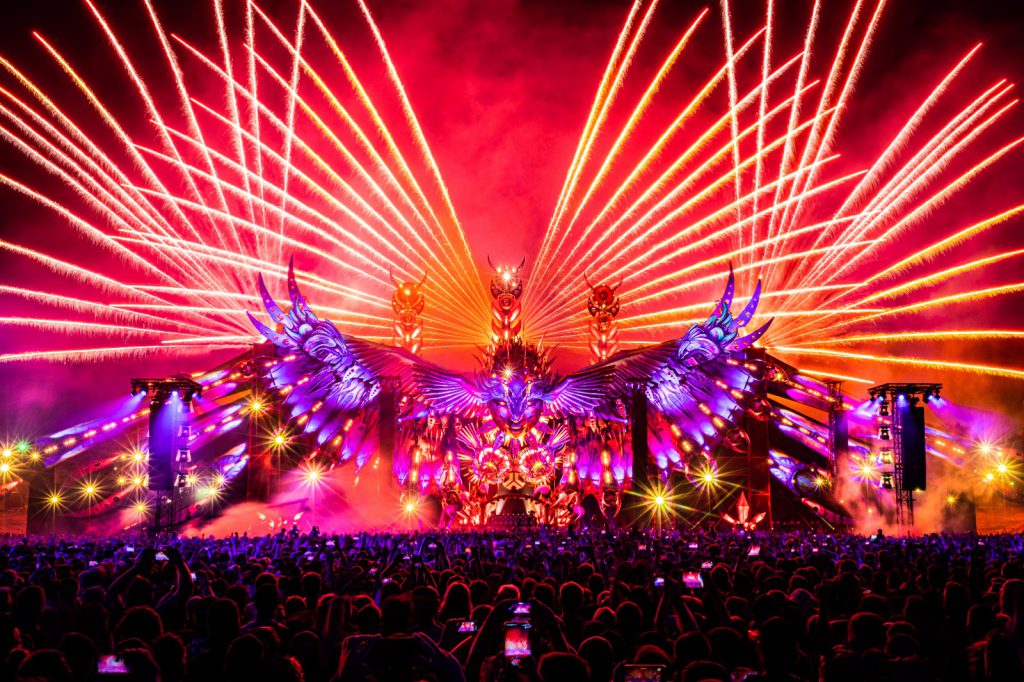 Build-up of the colorful UV stage

This is how it turned out!

Hungry and thirsty visitors lined up during the event

And with thousands of visitors during one of the show days

And the Blue surrounded by visitors during Defqon.1

Where would you go?

From an empty field…..

To thousands of tipi’s and other tents and accommodations

With around 45.000 camping guests per day, it is one of the largest camping sites in Europe

The centre piece of the Gold Stage

You can see it from far

And this is how it looked inside

The iconic entrance of the RED area

It’s not to be missed!

Hands up for the absolute Backbone Defqon.1 Dreamteam! From left to right: Mette, Jenno, Mick, Jari, Laurens and Sven (including Stan, Frank and Simone of course who are not in this picture)