We were fortunate, that in recent years, we could spread our wings and realize our international ambitions,” said Joris Joosen. “It was our dream to create a global production net­ work, where we can connect people with the same passion and Backbone DNA. However, our growth brings challenge: we want to offer all of our customers the same quality and service, without making any concessions. We invest in our local networks and enter into join ventures with local parties. There are good producers in every country. By sharing knowledge and experiences, we try to raise the quality level everywhere.”

Not only the growth of the company in recent years, large steps have also been taken in the process. Joosen: “The con­sumer mainly sees the outside, the many beautiful productions that we are able to work on. But the behind the scene and backstage details are just as important. Then I mean the focus on the technical drawings and the designs, which form the foundation of all productions. We strive to achieve one Backbone standard for techni­cal drawings for all of our productions.” “Our office in Hong Kong works in the same way as in Amsterdam or New York,” says Alex Melsen, technical designer at Backbone’s headquarters. “Remember that you are dealing with different time zones. In Hong Kong it is eight hours later, in New York six hours earlier. For example, large shows in China and Japan are outlined in Amsterdam, after which the drawings are taken over by colleagues in America. That way we can draw around the clock and be active 24 hours in a day, literally! Of course, there are still some bumps in the road, but in the end you should not see which tech­nical designer is responsible for a drawing. The Backbone ‘style’ guarantees quality.” “Morever, we can reduce the workload by executing in this manner”, adds Joris Joosen. “The festival season in Europe has very different peaks in comparison with Asia, for example.” Yet another challenge is the language: “We are now completely mo­ving to English. That sounds like a simple step, but it does require all the necessary feet on the ground. All procedures, manu­als, and so on are now under scrutiny and are sent to our staff in the cloud.”

The designers and drafters at Backbone use the extensive CAD drawing program SCAD Re­Event. The company has a close relationship with developer AniVizzion from the Netherlands. Alex Melsen: “Thanks to our collaboration, we are the first to test unique functions and quickly switch to new developments. A good dra­wing helps a customer visualize his event, catch possible bottlenecks, and manages expectations. Through this way, our cus­tomers see immediately how their event will look and what is being delivered. In addition, we can see in a drawing whether different disciplines collide with each other (collision management). Many external designers and suppliers are often involved in our productions. We capture all rela­ted information in our central production drawing, so that an overall picture of the production is created. An important part of this is a detailed 3D location drawing. By combining all the information, you receive a framework which problems can be identified within and ultimately, solu­tions can be found. Think… loudspeaker arrays that are maybe too long, the sight­ lines, and the escape routes – to name a few examples. Furthermore, we can, based on the drawings, consult with suppliers and discuss all needs for a specific project. Also whether this can be achieved with standard rental equipment, or whether we have to construct something custom. Based on all this data, we are able to give our custo­mers a quick and specific cost indication. In this matter, a drawing isn’t just that, it’s dynamic and ‘living’ – which means it can constantly be adjusted and tweaked.”

Looking back on 2017, Melsen mentioned the Amsterdam Music Festival (AMF) in the Amsterdam ArenA during the last editi­on of Amsterdan Dance Event as one of the highlights. “For AMF, it was a challenge to stay as close to the original design as pos­sible, without losing sight of the budget and facing all technical challenges. We are also proud of the Red Bull BC One World Final (World Cup Breakdance) which we, toge­ther with Red Bull and Tribe Company, produced in the Westergasfabriek in Amsterdam on the 2nd, 3rd, and 4th of November. If you see how much mate­rial we put into that space… In a location of sixty meters in diameter, constructions were, at some points, only five centimeters from the stone walls. You can only do so­mething like that if you work very detailed and know specifically what you are doing. This event was technically perhaps not the most complex, but the health and safety as­pects were additionally just as complex, if not more. Our clients, Tribe Company and Red Bull, were extremely satisfied, as well as ourselves!”

“In the coming years, we will mainly be able to expect further developments in creative video products,” says Melsen. “We will also see more ‘motion’ in productions. Think of elevators, movable bridges, flight systems, but also robot arms, self propelled risers and drones.”

Backbone maybe known for its large events, but the company also focuses on corporate events. Joosen: “In the past I expressed the wish to take care of more corporate events and we succeeded. We are currently wor­king for great agencies in the corporate world such as CG Creative, Kingcanary, oil, and Tribe Company. In short, the future looks bright for Backbone International.

We are still growing and the necessary pro­ jects are in the pipeline, such as corporate shows in Europe, North America, and Asia. In June, we are participating in a project around the time of the Champions League final in Kiev and we are also working on a special festival in Cuba. Furthermore, we are currently investigating the opportuni­ties for Backbone to break into the German market. We hope to start an office there in mid­2018 to serve our clients better there. Because that’s what it’s all about for us the coming years. Growing is one thing, but the most important thing is that all projects are optimally serviced and our customers are served efficiently.” 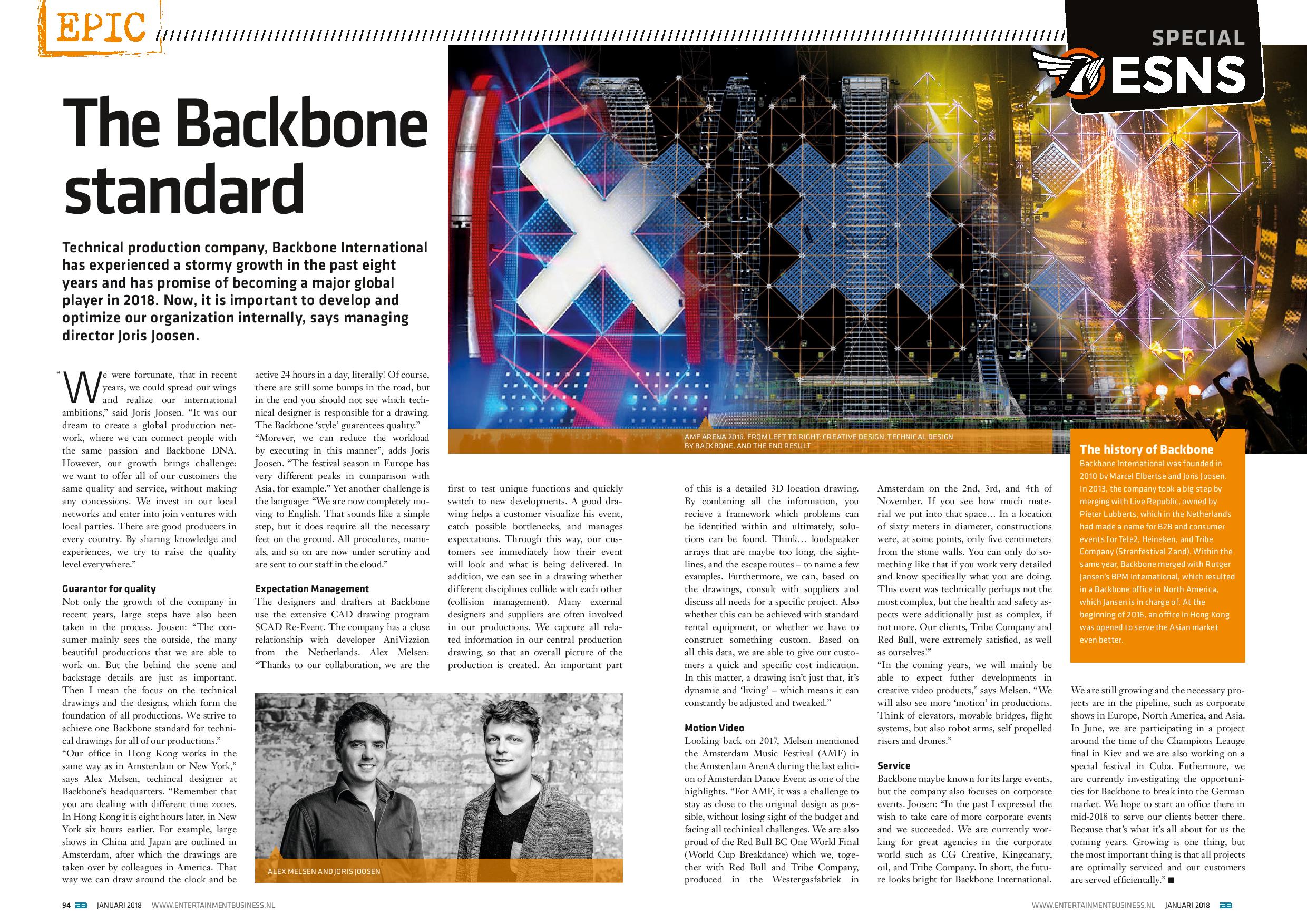