EB Live interview with Pieter Lubberts: ‘Sometimes we went too fast for The Hague’ August 23, 2021 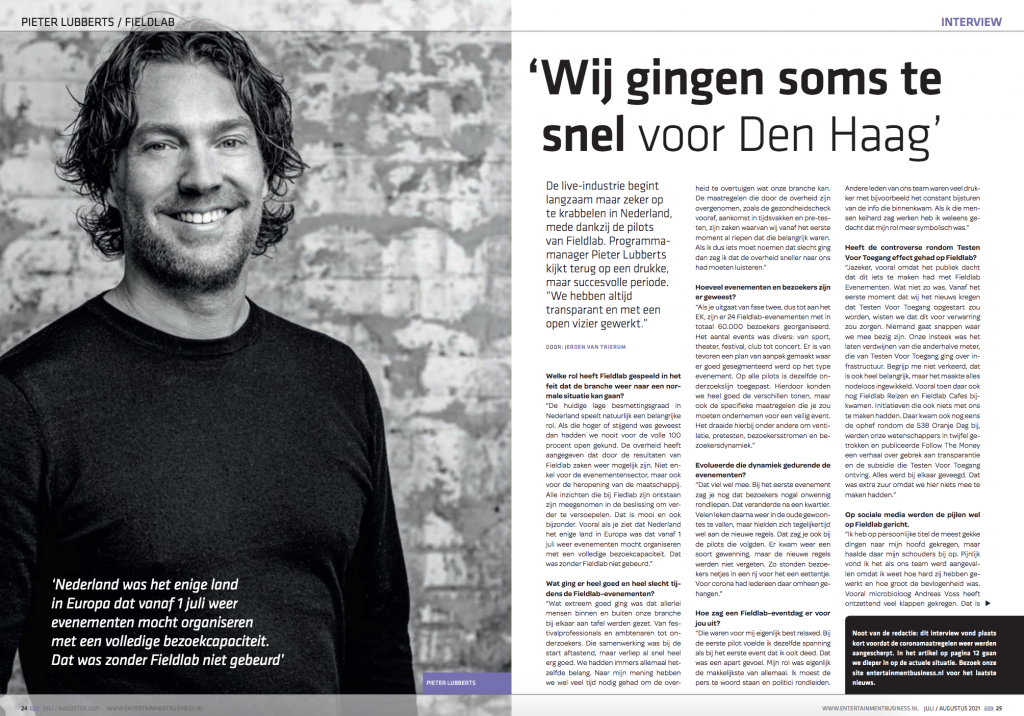 Editor’s note: This interview took place shortly before the Covid-19 measures were tightened up again.

“The Netherlands was the only country in Europe that was allowed to organize events again, with full visitor capacity, from 1 July 2021. Without Fieldlab, this wouldn’t have happened.”

The live industry is slowly but surely starting to recover in the Netherlands, largely thanks to the Fieldlab pilots. Program manager Pieter Lubberts looks back at a busy but successful period. “We have always worked with transparency and an open mind.”

What was Fieldlab’s role in getting the industry back to normal?

“The current low infection rate in the Netherlands plays an important role. If it had been higher or on the rise, we would never have been able to open up with full capacity. The government has indicated that the results of the Fieldlab Pilots have made things possible again. Not only for the event sector, but also for reopening society. All insights from Fiedlab have been included in the decision to decrease restrictions. This is very special. Especially when you see that The Netherlands was the only country in Europe that was allowed to organize events again, with full visitor capacity, from 1 July. This would not have happened without Fieldlab.”

What worked well and what didn’t work during the Fieldlab events?

“What worked extremely well was that all kinds of people, inside and outside our industry, gathered together at a table- from festival professionals and officials to researchers. Initially, we were tentative about this collaboration, but soon realized it worked exceedingly well. After all, each of us had the same interests. With respect to what could have been better- In my opinion, we needed a lot of time to convince the government on what our industry can do. The procedures that have been adopted by the government such as the health check in advance, arrival in time slots and pre-tests are actions that we emphasized as important from the very beginning. So, if I have to name something that could have been better, I would say that the government should have listened to us more quickly.”

How many test events and visitors have there been?

“If you start at phase two, so up to the European Championship, 24 Fieldlab events with a total of 60,000 visitors have been organized. The events were diverse: from sports to theatre to festivals to clubs and concerts. A plan of action was drawn up in advance, with proper segmentation, based on the type of event. The same line of research was applied to all pilots. This allowed us to highlight the differences very well, but also the specific measures that you should take for a safe event. This involved ventilation, pre-testing, visitor flow and visitor dynamics.”

Did that dynamic evolve during the events?

“Not that much. At the first event you could see that visitors were walking around rather uncomfortably. That changed after fifteen minutes. Many seemed to fall back into old habits after that but, at the same time, they adhered to the new rules. You also saw this in the pilots that followed. There was a sort of habituation again, but the new rules were not forgotten. Visitors stood neatly in line in front of the food stall. Before Covid-19, everyone would have gathered around it.”

What did a Fieldlab event day look like to you?

“They were actually quite relaxed for me. During the first pilot I felt the same tension as with the first event I ever did. That was a special feeling. My role was actually the easiest of all. I had to speak to the press and show politicians around. Other members of our team were much busier with, for example, constantly adjusting the information that came in. When I saw those people working hard, I sometimes thought that my role was more symbolic.”

Has the controversy surrounding Testing Before Access had an effect on Fieldlab?

“Yes, especially because the public thought it had something to do with Fieldlab Events. Which wasn’t the case at all. From the moment we got the news that Testing for Access was about to be launched, we knew this would cause confusion. No one was going to understand what we were doing. Our approach was to make the 1,5m distance rule disappear, that of Testing for Access was about infrastructure. Don’t get me wrong, that’s also very important, but it made everything needlessly complicated. Especially when Fieldlab Travel and Fieldlab Cafes were added. These were initiatives that had nothing to do with us either. On top of this was the commotion surrounding the 538 Orange Day (Kingsday). Our scientists were questioned and Follow The Money published a story about lack of transparency and the subsidies that Testen Voor Access received. Everything was clubbed together. It was very disappointing because we had nothing to do with any of it.” On social media, many shots were fired at Fieldlab.

“I personally got attacked quite a bit, but just shrugged my shoulders. What was painful for me was when our team was attacked because I knew how hard they worked and how dedicated they were. Microbiologist Andreas Voss, in particular, has been hit hard. That is unjustified, especially if you know that he did everything for free. He has cooperated selflessly and has spent a lot of (free) time on Fieldlab as Chief Researcher. In addition to all the negativity on Twitter, Andreas was also attacked by colleagues in his work field. That’s just unfair. Especially when you now know that without him, we would never have been able to open up the event industry on 1 July.”

How hard does the criticism hit you?

“At one point, I saw the program that everyone had worked so hard on slipping through our fingers. That was a very unpleasant period. At the same time, everyone here knew the way we worked -transparent with an open mind and without any form of arrogance. We knew it was extremely important for our industry and for the 100,000 people that work here. We knew very well that our starting point has always been the right one and that has now been confirmed. That is a great compliment to the team and the steering committee.”

An important link within Fieldlab was the collaboration with the government in The Hague. Did that go smoothly?

“I found that very interesting. In my job at Backbone, I have had conversations with politicians before, but at a local level. Sitting at the table in The Hague is something completely different. What stayed with me is that there have been many civil servants who have opened doors for us. Everyone was willing to hear our story. Nevertheless, it took a lot of energy to convince the government that we as an industry were not cowboys but serious professionals with an excellent worldwide reputation. What I have learnt the most in that period is patience. In our minds, sometimes we went too fast for the government at The Hague. After all, there are many more stakeholders present there who need to have an opinion.”

Did you expect in advance that the full capacity events could be achieved so quickly without the 1.5 meter rule?

“Due to the results of the first eight Field Labs, there was a spark of hope that the industry could open much earlier. Truthfully, that might have been possible. However, the government’s and society’s mindsets were not there yet. You must not forget that those eight events were organized in a period of severe contamination. Nowhere else in the world did they dare to take on a similar initiative. After phase two, we noticed that there were fewer and fewer infections and the vaccination program was starting. That, of course, played an important role in the decision to allow events again. On one hand, I sometimes think this could have been done faster but at the same time I also know that the final result couldn’t have been achieved faster.”

Several countries have tightened the COVID measures again. If that also happens in the Netherlands, will Fieldlab start again?

“We have taken into account that a situation could arise in the future that could lead to a resurgence of the virus. Let’s hope it isn’t necessary, but if that happens, we will be on standby as a Fieldlab team. We have prepared a scenario for all risk phases – serious, worrisome, alert.”

Now that Fieldlab is behind you, is it ‘back to normal’ again?

“I started in July last year and from then on it has been relentless until the end of May 2021. At the end of the ride, I was really tired. It was only after the cabinet decisions were made that we realized what a rollercoaster ride we had been on. I am extremely grateful and proud of the Backbone team, who looked after the ‘store’ and kept it running wonderfully. I’ve been working on a festival production again for a few weeks now. That’s super fun. I hadn’t realized I’d missed it so much. Getting back to work in the old-fashioned way and doing things we are good at is, of course, the main reason why everyone joined Fieldlab over the past year and a half.”

In this article we mentioned the controversy surrounding Testing for Access. The investigative journalism platform Follow The Money published an article in mid-April about the lack of supervision and transparency during the design and implementation phase of Testing for Access. For the organization, a foundation was set up, Open Nederland, without connection to the government and led by a former top soldier Tom Middendorp. Across the year, the Ministry of Health paid hundreds of millions of euros to Open Netherlands. Follow The Money stated that this amount was spent at its own discretion to organize the so-called test society. Although Middendorp later contradicted this, the Follow The Money story caused a lot of disapproval and controversy.

“In our minds, we sometimes went too fast for the administrators in The Hague. After all, there are many more stakeholders there who all have to find something.”