EB Live interview: There is no script for this situation December 15, 2020

Backbone International saw the global live market collapse due to the pandemic. The technical production company did not give up and started looking for alternatives. Co-founder Joris Joosen: “We have found a solution where we can stay together as a team and that is fantastic.”

“These are interesting, complex and also sad times,” says Joris Joosen, one of the founders of Backbone. “Our heart and DNA lie in the events world and what our industry is experiencing now is unprecedented. At the beginning of April we existed for ten years and instead of a party we now had a completely different meeting. With our team we put our heads together and said: we can do two things. Either we will give up and then we will lose our company, or we will all work creatively and see how we get through this period, so that we can then continue as a team. We did have a piggy bank with which we could bridge a few months without events, but a year or more is another story… ”

We always have nice scripts available for all events, but for the situation we will be in from March there is no script … that requires courage, teamwork and entrepreneurship. ”

Backbone International has offices in North America, Europe and Asia and an action plan has been devised for each continent. Joosen: “We really see Backbone International as one team, but we have focused on solutions and alternatives per continent. In Europe the governments offer support, but this is not the case in Indonesia. In America we were able to make use of the so-called Paycheck Protection Program (PPP) and we have taken out a Small Business Loan. At the same time, we are looking for alternatives. For example, we started doing health screenings at a large tech company in San Francisco. That project is now coming to an end, but in its heyday we ran about 30 to 40 shifts a day, seven days a week. Margins were nil, but we were able to second two of our team members there to manage things. That way we could keep the engine running. We had to partially scale down our Backbone America team, but the core is still there and we are fully operational. In fact, we are fully engaged in 2021 preparations in America together with our partners such as Insomniac and Rolling Loud. These organizers are keen to keep their events going. Fingers crossed. In any case, we are ready for it. ”

In Indonesia, the government has imposed strict corona regulations on the hospitality and hotel industry. Within Backbone Indonesia we have followed a training course to enforce these rules. “An agency in Jakarta is conducting these corona audits and we have trained two people who can perform them. Is that where you have your passion? No. But it does help us get through this period. ”

Backbone has not been completely silenced in Indonesia. Together with Berlian Entertainment, Reza Lesmana, Managing Director of Backbone Indonesia, organized a successful corona-proof drive-in concert in Jakarta, where visitors in 300 parked cars attended a concert by, among others, the Indonesian pop group Kahitna. “We then started working on two new concepts: a bike-in concert and a ‘concert for plants’. In Jakarta people have not only started cycling en masse, the flower shops are also doing good business. When I heard the idea of ​​a plant concert, I had to chuckle a bit, but it is a great initiative: a concert is streamed in the mountains, where the “visitors” are plants. Both events are now on pause, because a lockdown has been announced. However, the plans are finalized, so we can start immediately in December or January when the GO moment has been announced. ”

In the Netherlands, Backbone works closely with the various GGD authorities. Joosen: “We were involved at an early stage in the start-up of a corona testing street in the Haagland region.

Besides that we worked on small-scale initiatives. For example, together with ID&T, we were involved in the timeless pop-up camping site and were allowed to help with the live streams of Sensation and DefQon1. That was very good for the work ethic, but was not successful financially. These GGD projects are still ongoing and we recently received a tender together with SOLID. Under the leadership of the SOLID team, we jointly manage the National Testing Service Desk. Part of this counter is that local GGDs can request corona test buses on demand.
In addition, they can also scale up when it comes to staffing levels via this counter. We are currently working on the construction of an XL Coronatest street in Eindhoven.The unrest caused by the crisis has not completely disappeared, but has move to the background bit more. “Through the above projects we have found a solution where we can stay together as a team and that’s fantastic. ”

In the coming years, the focus will be on building Backbone on the three continents. “As management, we are now looking at how we can expand and strengthen Backbone and our team in the coming decade. After 5 years in Asia, I will soon come back to the Netherlands and can then think about it extensively with my partners Pieter Lubberts and Marcel Elbertse. The events and festivals will be back, I am convinced. It may take a while, but when the time comes, there will be a very strong Backbone. ” 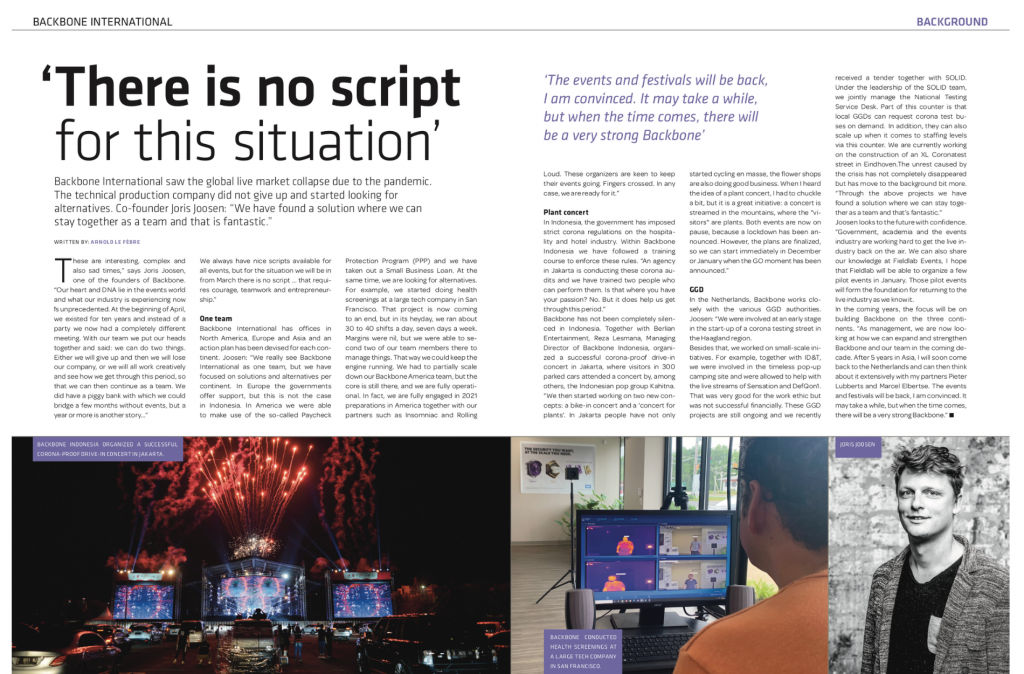