Over the last ten years, technical production company Backbone International has grown into a leading global player. After opening offices in Amsterdam, New York and Hong Kong, the company now turns to the Indonesian capital, Jakarta.

Managing director Joris Joosen: “We have been building the ‘Backbone brand’ for almost ten years now, with constant focus on quality. And all the time and love that we have put into this is now paying off. 2018 was a very good year for Backbone International. We worked on some great events and produced fantastic projects all across Europe, North America and Asia. Examples include the UEFA Champions League final 2018 in Kiev, and the Holland Heineken House during the Winter Olympics in South Korea. In addition, we were able to welcome some new customers. We have always dreamed of creating a global network of specialists, and this dream seems to be coming true more and more.”

Backbone International opened an office in New York in 2013, followed by an office in Hong Kong in 2016. And now, three years on again, it’s time for another milestone: Backbone Indonesia, which officially opened on 1 March 2019. “The time was right to take the next step,” says Joosen. “Ambitions are there to be achieved!” Indonesia is currently undergoing massive development. Almost 250 million people live there, and Indonesia is fourth on the list of most populated countries, after China, India and the United States. Indonesia has a big, relatively closed economy that has been showing growth for years. Indonesians have higher spending power – particularly when it comes to leisure time. The number of major events and concerts has exploded over recent years. Joosen: “The time is right for Backbone International to open an office in the capital city, Jakarta, on the northwest coast of the island of Java.”

Reza Lesmana has been recruited to run Backbone Indonesia. “I have a musician background,” says the 34-year-old from Indonesia. “As a singer, I toured extensively throughout Indonesia and that’s where I learned my first lessons on how it all works in this industry. In 2009, a friend asked me if I wanted to help him out with promoting several international acts. I felt comfortable doing that and soon I became involved in producing events on a bigger scale, By 2012 I’d had enough of touring, started focusing on technical production of international band concerts. My first dance festival was Dreamfields Festival. The events took place on the island of Bali in 2014 and 2015 in the GWK Cultural Park.

Lesmana came to the notice of Backbone International in 2014. Joris Joosen: “Reza was working for us as a freelancer in Taiwan, India, Japan and Indonesia. We got in touch and it just clicked. Reza is ambitious and has the ‘Backbone DNA’. He has been in the Netherlands for a few months and has seen what we do here and how we work. The foundations of Backbone Indonesia were laid there and then.”

Lesmana: “The market for live events in Europe is a lot bigger, more professional and more difficult as there is more fierce competition. I envy all the expertise and experience that Joris and his colleagues have built up. In Indonesia, however, we are catching up. Having more events market generally, the demand for concerts and festivals is increasing.”

About 10 years ago people in Indonesia were particularly into pop, rock, and jazz music, says Lesmana. “Dance music has also been very popular thanks partly to the big events organised in Jakarta, Bali and Bandung. Furthermore, K-pop has been on the rise over the past four years, but that is no different than in Europe.” Another difference is the importance that is attached to the line-up, although that is changing slowly. “In Indonesia, people are still mainly interested in the names on the flyer. In the Netherlands and the rest of Europe, the ‘experience’ itself plays just as big a role. I can see a change, however. More and more festivals are organised in beautiful settings, such as in the hills or areas of natural beauty in the interiors. There are often production challenges there which we like to tackle.”

In August and September 2018 the 18th Asian Games took place in the Indonesian cities of Jakarta and Palembang. The Asian Games are the biggest multi sports event after the Olympics in which only Asian nations take part, 45 to be exact. The team from Indonesia carried out several production projects, including supplying staff to MTD from the Netherlands, and the Backbone team took part in the opening and closing ceremonies. Reza Lesmana was, moreover, involved as local production manager for the ceremonies at the Asian Paralympic Games. Backbone Indonesia produced the Guns N ‘Roses concert and one of the biggest Indonesian bands called Slank in Jakarta at the end of 2018.

“Upcoming project are concerts by Ed Sheeran and John Mayer. Hopefully we will be involved on both shows” Lesmana says. “Ed Sheeran will be performing in May at the nations sacred place Gelora Bung Karno Stadium – Jakarta, meanwhile John Mayer will perform at the Indonesia Convention Exhibition – Tangerang in April. Furthermore, we are busy with events for various political campaigns. The general election takes place in Indonesia on 17 April. At the moment so many events are happening and we are helping organisers with political campaign events.”

Lesmana emphasises that Backbone not only produces large events, but also smaller, exclusive shows. “We are not only involved in large-scale concerts and festivals, but are also on the lookout for new markets and small-scale B2B projects. For example, in the last three years we produced an annual event for around 300 – 1000 visitors to the Dutch embassy in Jakarta.”

Putting them on the map

It is now important to put Backbone Indonesia well and truly on the map and expand. “It would be great if, just like the Backbone offices elsewhere in the world, we could transfer and pass on our skills and boost the overall level of expertise in Indonesia and the surrounding area.” Which band or festival would Reza Lesmana like to put on in Indonesia? “I can be clear about that: Foo Fighters! I am a big fan of that band. In August 2017 they appeared in Singapore, but appearing in Jakarta would be even more amazing! Finally, we asked Joris Joosen what else we can expect from Backbone International this year. Joosen laughs and says: “I can’t say too much, but just recently I have been in Sydney regularly, so who knows…” 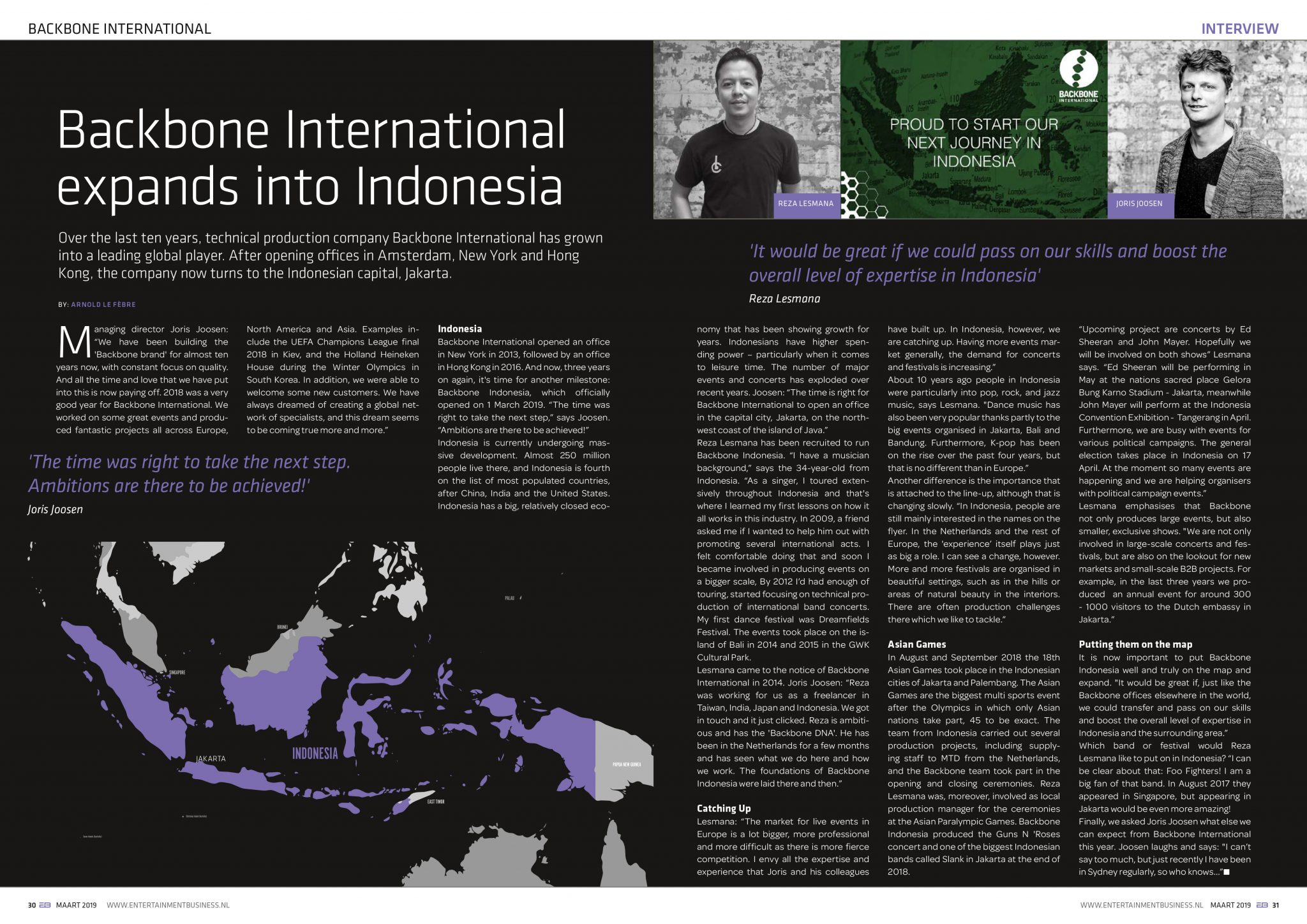